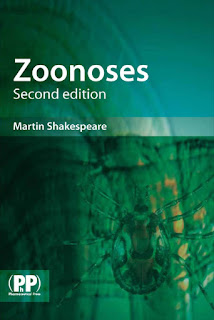 This is an introductory guide to the prevalence and treatment of zoonoses; infections transmitted to humans from vertebrate animals. Zoonoses are diseases and infections that are transmitted between vertebrate animals and humans. Infections can be inconvenient or life-threatening and may be transmitted by companion animals, agricultural animals, or by foods. Since contact with animals is commonplace all health care professionals should have an understanding of the importance, diagnosis and treatment of zoonotic infections. In recent years, since the publication of the first edition of “Zoonoses”, there has been a much greater awareness of the dangers that food borne diseases such as E.Coli, BSE, etc. can pose to human health as a result of poor agricultural, hygiene or regulatory practices. In addition, the transmission of animal borne respiratory viruses such as avian (bird) flu and SARS are now recognized as significant hazards to human health with the potential to cause global pandemics. Zoonotic infections have also been recognized as biological warfare agents (e.g. anthrax) and have the potential to be used, or have been used in reality, in terrorist attacks. Since 2002, there has been a considerably increased awareness of zoonoses amongst health care professionals, governments and the public. There is also considerably more scientific understanding of these infections and their treatment. The new edition of this book is therefore very timely. In many respects the first edition of “Zoonoses” could be considered ahead of its time although it is now somewhat dated. This new edition contains completely revised and updated text highlighting the most significant recent threats to human health such as avian flu.