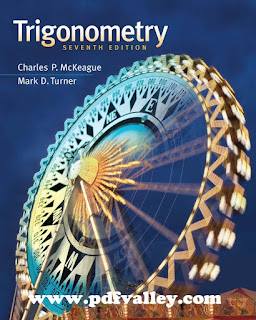 Gain a solid understanding of the principles of trigonometry and how these concepts apply to real life with McKeague/Turner’s TRIGONOMETRY. This book’s proven approach presents contemporary concepts in brief, manageable sections using current, detailed examples and interesting applications. Captivating illustrations drawn from Lance Armstrong’s cycling success, the Ferris wheel, and even the human cannonball show trigonometry in action. Unique Historical Vignettes offer a fascinating glimpse at how many of the central ideas in trigonometry began.

Mark D. Turner earned his B.A. in Mathematics from California State University, Fullerton. Professor Turner worked in the aerospace industry for two years with the Systems Modeling and Analysis group at The Aerospace Corporation before completing his graduate work at California Polytechnic State University, where he earned his M.S. in Mathematics and Secondary Teaching Credential. Turner is a full-time instructor at Cuesta College in San Luis Obispo, California. He has been a leading influence in the use of graphing calculator and multimedia technology in the classroom, as well as a leading innovator in instructional website design at his institution. Mark has also created educational materials through his own company, Turner Educational Publishing, including a series of Web-based tutorials on the use of the TI-83 graphing calculator. He is a member of the American Mathematics Association for Two-Year Colleges and the California Mathematics Council for Community Colleges, and is a frequent speaker at annual conferences. Professor Turner has received the CMC3 Award for Teaching Excellence.

Equine Neck and Back Pathology Diagnosis and Treatment...