The Theoretical Minimum: What You Need to Know to Start Doing Physics

You can download The Theoretical Minimum: What You Need to Know to Start Doing Physics by Leonard Susskind and George Hrabovsky free in pdf format.
Basic Books | January 2013 | ISBN-10: 046502811X | PDF 15.4 mb 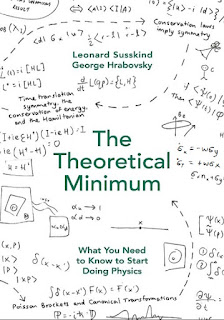 A world-class physicist and a citizen scientist combine forces to teach Physics 101—the DIY way
The Theoretical Minimum is a book for anyone who has ever regretted not taking physics in college—or who simply wants to know how to think like a physicist. In this unconventional introduction, physicist Leonard Susskind and hacker-scientist George Hrabovsky offer a first course in physics and associated math for the ardent amateur. Unlike most popular physics books—which give readers a taste of what physicists know but shy away from equations or math—Susskind and Hrabovsky actually teach the skills you need to do physics, beginning with classical mechanics, yourself. Based on Susskind’s enormously popular Stanford University-based (and YouTube-featured) continuing-education course, the authors cover the minimum—the theoretical minimum of the title—that readers need to master to study more advanced topics.
An alternative to the conventional go-to-college method, The Theoretical Minimum provides a tool kit for amateur scientists to learn physics at their own pace.

Leonard Susskind has been the Felix Bloch Professor in theoretical physics at Stanford University since 1978. The author of “The Cosmic Landscape” and “The Black Hole War,” he is a member of the National Academy of Science and the American Academy of Arts and Sciences, and the recipient of numerous prizes including the science writing prize of the American Institute of Physics for his Scientific American article on black holes. He lives in Palo Alto, California.
George Hrabovsky is a hacker-physicist in Wisconsin involved in as citizen science, or the community of individuals who do science at home. Since May 1999 he has been the president of Madison Area Science and Technology (MAST), a nonprofit organization dedicated to scientific and technological research and education. A US Navy veteran and self-taught physicist, Mr. Hrabovsky does research into theoretical and computational physics specializing in astrophysics, atmospheric physics, information theory, and gravitation. He lives in Madison, Wisconsin.

It Takes A Murder by Anu Kumar

Drawing for the Absolute and Utter Beginner