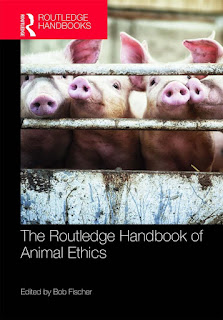 There isn’t one conversation about animal ethics. Instead, there are several important ones that are scattered across many disciplines.This volume both surveys the field of animal ethics and draws professional philosophers, graduate students, and undergraduates more deeply into the discussions that are happening outside of philosophy departments. To that end, the volume contains more nonphilosophers than philosophers, explicitly inviting scholars from other fields—such as animal science, ecology, economics, psychology, law, environmental science, and applied biology, among others—to bring their own disciplinary resources to bear on matters that affect animals.
The Routledge Handbook of Animal Ethics is composed of 44 chapters, all appearing in print here for the first time, and organized into the following six sections:
I. Thinking About Animals
II. Animal Agriculture and Hunting
III. Animal Research and Genetic Engineering
IV. Companion Animals
V. Wild Animals: Conservation, Management, and Ethics
VI. Animal Activism
The chapters are brief, and they have been written in a way that is accessible to serious undergraduate students, regardless of their field of study. The volume covers everything from animal cognition to the state of current fisheries, from genetic modification to intersection animal activism. It is a resource designed for anyone interested in the moral issues that emerge from human interactions with animals.
Download The Routledge Handbook of Animal Ethics
0
FacebookTwitterPinterestEmail
previous post