The Immortal Game A History of Chess 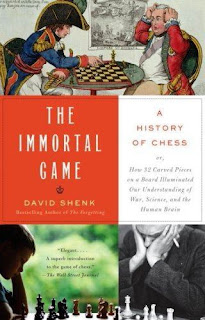 Chess is the most enduring and universal game in history. Here, bestselling author David Shenk chronicles its intriguing saga, from ancient Persia to medieval Europe to the dens of Benjamin Franklin and Norman Schwarzkopf. Along the way, he examines a single legendary game that took place in London in 1851 between two masters of the time, and relays his own attempts to become as skilled as his Polish ancestor Samuel Rosenthal, a nineteenth-century champion. With its blend of cultural history and Shenk’s personal interest, The Immortal Game is a compelling guide for novices and aficionados alike.

David Shenk is the national bestselling author of five previous books, including THE FORGETTING (“remarkable” – Los Angeles Times), DATA SMOG (“indispensable” – New York Times), and THE IMMORTAL GAME (“superb” – Wall Street Journal). He is a correspondent for TheAtlantic.com, and has contributed to National Geographic, Slate, The New York Times, Gourmet, Harper’s, The New Yorker, NPR, and PBS. His new book, THE GENIUS IN ALL OF US, has been called “engrossing” by Booklist (starred review) and “empowering…myth-busting” by Kirkus.Shenk’s work inspired the Emmy-award winning PBS documentary “The Forgetting,” and was featured in the Oscar-nominated feature “Away From Her.” He has advised the President’s Council on Bioethics, and is a popular speaker. His original term “data smog” was added to the Oxford English Dictionary in 2004.