Rabies in Man and Animals by Sudhi Ranjan Garg

You can download Rabies in Man and Animals by Sudhi Ranjan Garg free in pdf format. 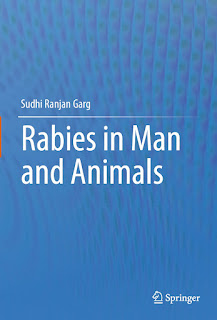 Rabies is the deadliest zoonotic disease that threatens humans and animals on all continents except Antarctica. Asia and Africa are worst affected as more than 95 per cent of rabies associated human deaths occur in these regions. India alone bears about 36 per cent of the global human rabies burden. Dogs are the main transmitters of rabies that potentially threaten over 3 billion people in Asia and Africa. Many developed nations have been able to successfully control dog rabies but continue to face the risk from wildlife including bats. Bat rabies is responsible for most human rabies deaths in the United States of America and Canada but has emerged as a public health threat in Australia, Latin America and Western Europe as well. Despite being vaccine preventable, rabies continues to haunt the mankind. Poor resources is a major constraint but the factors like low priority attributed to rabies, misconceptions in the community about the disease and unsystematic approach for its prevention and control are also responsible for the grim situation. Targets have been set for elimination of human and dog rabies in all Latin American countries by 2015 and of human rabies transmitted by dogs in South-East Asia by 2020. However, the myths prevailing among the people together with inadequate knowledge of the health professionals, veterinarians, and the civic body staff about the rabies prevention and control strategies might make the task very difficult. This book comprising eight chapters elaborates the causation of rabies in man and animals, its global epidemiology, risk analysis and effective strategies for the management of exposures. Proven methods of rabies prevention and control have been discussed in length along with the challenges and ways to overcome the constraints through intersectoral coordination. The inclusion of 200 frequently asked questions is a unique feature of the book which may help not only the common people and pet lovers in clearing their doubts about rabies in man and animals also be equally instrumental in updating the knowledge and skills of the public health personnel, veterinarians and other professionals. Apt illustrations and simple language make the contents of the book easily comprehensible and a reading pleasure