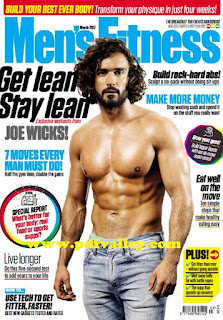 Men’s Fitness (UK) is a monthly men’s magazine specialising in health and fitness and published by Dennis Publishing in the UK and Ireland. The magazine’s slogan is “Fit For Life”, and it targets men of all ages, featuring the latest tips, advice and information on training, nutrition, muscle-building, fat loss, and sports performance, as well as sex tips, grooming advice, celebrity interviews, and in-depth features and analysis on the core and emerging health and fitness trends. As of the April 2015 issue, the magazine consists of four distinct sections: Upgrade (short, tip-based fitness and nutrition articles, kit reviews and columns by fitness professionals, sportsmen and other experts), features, Fuel (nutrition) and Trainer (weight and performance training). Its editors have included Pete Muir (currently editor of sister magazine Cyclist) and Jon Lipsey, now the publishing director of digital fitness magazine, IronLife. The current editor is Joe Barnes, formerly editor of FHM and Front, while erstwhile children’s author and games journalist Joel Snape is associate editor and Will Jack, who has also worked at FHM and Front as well as Sport, is art director. A former deputy editor, Andy Dixon, is editor of Runner’s World in the UK and another, Michael Donlevy, was editor of the UK edition of Maxim before its closure in 2009. In 2009 Dennis Publishing acquired control of the complete publishing rights for Men’s Fitness in the UK and Ireland. The magazine was previously published under licence from American Media, Inc. Dennis has also published a number of books under the Men’s Fitness brand, known as MagBooks, including the Amazon UK best-seller 12 Week Body Plan by its former deputy editor Joe Warner and personal trainer Nick Mitchell. In 2013 the magazine launched an interactive edition.