Egypt And Western Asia In Light Of Recent Discoveries by King L.W. 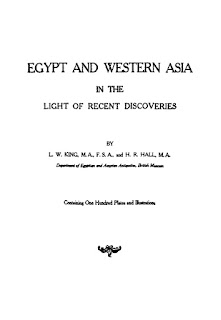 Leonard William King was an English archaeologist and Assyriologist. He was born in 8 December 1869 & died in 20 August 1919. He got his education at Rugby School and King’s College in Cambridge. He taught Assyrian and Babylonian archaeology at King’s College for a number of years, and published a large number of works on these subjects. His work is Leonard William King, Letters and Inscriptions of Hammurabi, Egypt and Western Asia in the light of Recent Discoveries, Chronicles Concerning Early Babylonian Kings, Legends of Babylon and Egypt in Relation to Hebrew Tradition & The Code of Hammurabi.
Download Egypt And Western Asia In Light Of Recent Discoveries by King L.W. pdf