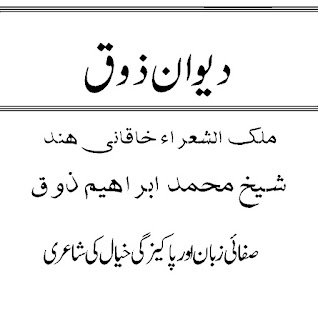 Sheikh Muhammad Ibrahim Zauq (1789–1854)  was born is Delhi . His father’s name was Sheikh Muhammad Ramzan who was a common soldier in the Mughal army . They were very poor . Zouq was sent to Maktab . He could not complete his education in Maktab . But he had great interest in poetry . He chose Shah Naseer as his mentor for the improvement of his poetry . He used his pen name “Zouq”. He became more popular than his mentor . He started participating in royal mushairas . He was appointed the mentor of prince Bahadur Shah Zafar . He was rival of Ghalib in poetry . Their rivalry of poetry is very interesting and well known . He was more popular than Ghlaib  though not as great a thinker as Ghalib .Ghazal , Qasida and Mukhammas were the main genres he used . In short he was a great poet of urdu .
Download Dewaan E Zouq pdf