Mirza Asadullah Khan Ghalib (27 December 1797 – 15 February 1869) was born in Kala Mahal , Agra .His father’s name was Mirza Abdullah Baig Khan who died in a battle in 1803 in Alwar . He was raised first by his Uncle Mirza Nasrullah Baig Khan.At the age of thirteen, Ghalib married Umrao Begum, daughter of Nawab Ilahi Bakhsh. He had 7 children but none of them survived .Ghalib started writing poetry at the age of 11.First he used his pen name as “Asad”later he changed it to “Ghalib”.He was the great poet of urdu and persian language . His honorific was Dabir-ul-Mulk and Najm-ud-Daula. Ghazal , Qasida , Rubai and Qataa were the main genres he practiced in .Not only Urdu poetry but prose is indebted to Mirza Ghalib . “Deewan e Ghalib” is one of his notable work . 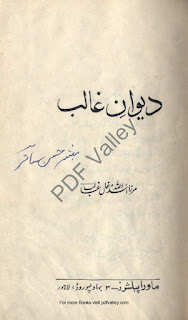