You can free download Animal Vigilance Monitoring Predators and Competitors by Guy Beauchamp in pdf format. 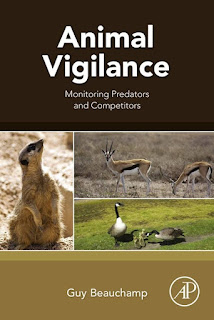 Wildlife enthusiasts all know firsthand how difficult it is to approach animals undetected. Fleeing individuals are too often all we can glimpse even after a careful approach. Vulnerable animals possess an uncanny ability to detect threats from afar. The reason for this is that animals are ever vigilant for any cue in their surroundings that signals danger. There must be strong selection pressure to maintain a vigilant state. Nonchalant prey animals, for instance, would detect predators too late to escape successfully. Similarly, indifferent group members would miss cues that rivals covet their resources. Vigilance can increase the ability to detect and assess such threats, but it comes at the cost of diverting attention from other fitness-enhancing activities such as foraging and resting. Animals must therefore balance vigilance and competing activities to increase their chances of surviving or deterring attacks while avoiding starvation.
The idea that vigilance plays a role in reducing predation pressure was first formulated in the scientific literature more than 100 years ago by British naturalists like Galton and Bates. Modern vigilance research started with the formulation of a mathematical model by Pulliam in 1973, which describes how scanning the surroundings can increase predator detection. The model showed, not surprisingly, that detection should be more likely when the predator takes longer to mount an attack. In addition, when a predator targets individuals in a group, detection should occur earlier because of the multiplicity of the senses commanding all approaches. More surprisingly, extra safety in a group could allow individuals to reduce their own vigilance at no increased risk to themselves.
In the following decades, animal vigilance students tested these predictions in a wide range of species and also uncovered many internal or external factors driving vigilance levels. These different factors affect the risk perceived by animals and thus modulate the expression of vigilance.

Essentials of Disease in Wild Animals by Gary Wobeser